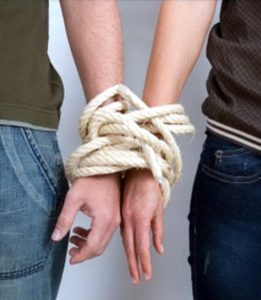 Co-dependency can be described as ‘excessive emotional or psychological reliance on a partner, typically one with an illness or addiction who requires support’.

Co-dependency sufferers need to be needed and often exhibit such strong behaviours that they cause the person they want to help to become less self-sufficient. This is referred to as enabling. An enabler often allows the co-dependent person to continue in their harmful behaviour by making excuses for them or just overlooking negative actions.

Co-dependents can often become dangerous even to the people they claim to be helping, creating artificial situations and problems to ensure that they remain needed by that person in order to feed their own addiction.

Not feeling that you’re good enough or comparing yourself to others is a sign of low self-esteem. Sometimes it may seem that someone thinks highly of themselves, but it’s only a camouflage for really feeling unlovable or inadequate. Underneath, usually hidden from consciousness, or feelings of shame.

There is nothing wrong with wanting to please someone you care about, but the difference with co-dependents is they usually don’t think they have a choice. Saying “no” can cause them anxiety, and some co-dependents have a hard time saying “no” to anyone. They go out of their way and sacrifice their own needs to accommodate other people.

Boundaries could be described as an imaginary line between you and others. It divides up what’s yours and somebody else’s, and that applies not only to your body, money, and belongings but also to your feelings, thoughts, and needs. It is in this area in particular where co-dependents can get into trouble. They have blurry or weak boundaries between themselves and others. They feel the need to take on responsibility for other people’s feelings and problems or blame their own on someone else.

However, some co-dependents boundaries may be too rigid, making them closed off and withdrawn. This can make it hard for other people to get close to them. It is also possible for co-dependent people to flip back and forth between having weak boundaries and rigid ones.

One consequence of poor boundaries is that you may react to everyone else’s thoughts and feelings. If someone says something you disagree with, you either believe it or become defensive. You absorb their words because there’s no boundary. With a firm boundary in place, you would realise it was just their opinion and not a reflection of you, and that its ok to disagree with people.

Another effect of poor boundaries is that if someone else has a problem, you want to help them to the point that you might feel guilty if you don’t and give up yourself in the process. It’s natural to feel empathy and sympathy for someone, but co-dependents start putting other people ahead of themselves. In fact, they need to help and might feel rejected if another person doesn’t want help. Moreover, they keep trying to help and fix the other person, even when that person clearly isn’t taking their advice. For some co-dependents, their self-worth is dependent upon being needed.

Co-dependents may have trouble when it comes to communicating their thoughts, feelings, and needs. Obviously, if you don’t know what you think, feel or need, this becomes a problem. Other times, you may know, but you won’t own up to your truth as you’re afraid to be truthful in case you upset someone else. Communication becomes dishonest and confusing when we try to manipulate the other person because of our own fear.

Co-dependents have a tendency to spend their time thinking about other people or relationships. Often, they try to decipher what someone else is thinking or feeling and why. They might develop a dependency on others, resulting in anxieties and fears about being rejected, due to shame.

Co-dependents need other people to like them to feel okay about themselves, and they’re afraid of being rejected or abandoned, despite the fact that they can function on their own. Some co-dependents need to always be in a relationship because they feel depressed or lonely when they’re by themselves for too long. This can make it hard for them to end a relationship, even when the relationship is painful or abusive as quite often they end up feeling trapped.

Denial can be one of the reasons someone may not seek help for co-dependency issues or even admit they have a problem. Usually, they will attribute the problem to someone else or the situation. They will either keep complaining or trying to ‘fix’ the other person, or go from one relationship or job to another and never own up the fact that they have a problem.

Co-dependents can also deny their feelings and needs. Often they don’t know what they’re feeling and are instead focused on what others are feeling. The same thing goes for their needs, in that they pay attention to other people’s needs and not their own.

Although not directly referring to sex, sexual dysfunction can be a reflection of an intimacy problem. However, co-dependents can have problems with just being open and close with someone in an intimate relationship. Because of shame and weak boundaries, they might fear that they’ll be judged, rejected, or left. On the other hand, they may fear being smothered in a relationship and losing their autonomy.

All of the symptoms of codependency can lead to feelings of anger and resentment, depression, hopelessness, and despair.

If after reading this information you are concerned for yourself, a friend or family member, please contact us today. New Leaf is a rehabilitation centre based in Birmingham offering our services to those suffering from all kinds of addictions including codependency.

"Staff were incredibly considerate of my needs and both chefs took great care with my dietary requirements. The environment is friendly and homely yet extremely professional. Superb facility”